THE DELANEY
Journey to Banba

CHAPTER ONE: THE HOMECOMING 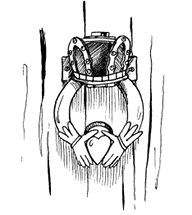 “Silence… Hush and be mute, or else our spell is marr’d”
—Shakespeare, The Tempest

Night was descending like a black-winged hawk, the first stars of summer hidden under its feathers. The driving rain slowed to a drizzle as a black limousine rolled up the gravel driveway of the old Kelly farmhouse, crunching as it stopped. The car’s occupants did not know that a stranger was watching their approach from behind a rickety fence which separated the southern edge of the Kelly place from the Coen house. Thirteen-year-old Caleb Coen squatted among the sticker bushes, a fresh scratch across his cheek, his wet clothes clinging like seaweed while he peered suspiciously at the glossy car. The edge of his nose and one eye fit perfectly through a gap in the old fence. He smelled the musty perfume of wet wood as he waited, motionless in anticipation.

Who’s coming to the Kelly place in a car like that? He wondered, That’s the slickest ride I’ve ever seen.

He took a wad of chewing gum from his mouth and stuck it on the fence, between the remains of ancient watermelon bubble and yesterday’s cinnamon chew. He smiled triumphantly, imagining the look on his parents’ faces if they ever should see this gallery of gum decorating their fence. Like they’d even notice, he thought. He looked over his shoulder to where they sat eating dinner in the bright light of their polished den, watching the nightly news, the television shining and blinking like a restless eye.

The driver, a short, stout man in a dark suit and cap, got out of the limo, retrieved an umbrella from the trunk and opened the rear door of the car. Caleb strained his eyes to see these two new figures emerge. One, a tall man in a trench coat, strode hurriedly towards the house, leaving the driver to escort a young girl dressed in jeans, a dark jacket, and a large cap hiding her face. She was holding a worn, stuffed bear. The girl stopped and looked around, her eyes squinting, her gaze blurred by the gathering darkness and drizzle, seeming momentarily to fix on Caleb’s hiding place.

Look away, he thought to himself, go inside. As though she had heard him, the girl turned around. The driver opened the umbrella and was about to hold it over her head when a gust of wind blew her cap off towards the fence. She pulled up her hood, ran after the cap, and bending to pick it up, paused for a second as though she were looking right through the fence at Caleb’s face. He froze, then grabbed a handful of pebbles and through a loose slat, hurled them at her feet, one by one. She gave a surprised shriek and ran to the front porch, joining the driver and the tall man in the trench coat.

“Great. Why is my reflex always to be a jerk?” Caleb grumbled angrily, as he shoved the loose slat back into place and ran towards his house. In his hurry, he barely noticed the scratches he had received from the brambles. Caleb would never have guessed that there were others watching from secret places among the trees, ones who whispered the name, Delaney, to the thickening fog and night air.

Download Chapter One EPub (for Nook and most other E-Readers)

Or, Read the rest of Chapter One Online 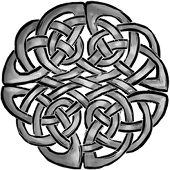 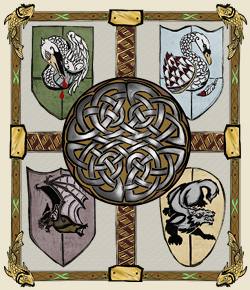